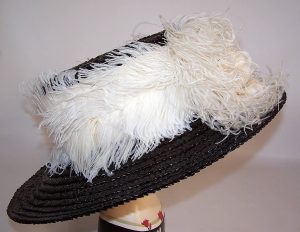 This is the hat that inspired my splurging on buying ostrich feathers and transforming a lovely wide-brimmed hat I already owned into a 1912-style Feathered Hat.

The new hat may not be suitable for gardening!! It is almost finished and as it stands it looks a little fancy for mucking about the pond and other about-the-house activities!

There may be very few occasions when it will be perfectly suitable. But now I own a perfectly decadent Ostrich Feather Edwardian style hat!

My hat has a rounded crown but will still be good for the project. After wiring the edge of it, the hat sat better. So I moved on to preparing the feathers. After searching the Internet for a while I liked this lady’s tutorial the best. It was well photographed and clearly explained: http://lynnmcmasters.com/OstrichPlumes.html. It took me a day to prepare the 20 feathers I had. They were prepared in sets of 2 and 3 feathers. 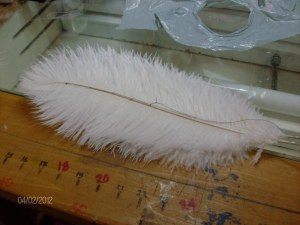 Then they were steamed for pushing the shafts all in one direction.

After they cooled down and I was confident they were dry enough, they were curved into wide arcs to fit around the crown of my hat. Today I am wondering whether I should lacquer it to make it shinier as it is in the picture that completely enchanted and inspired me to make this hat or should I leave it looking *natural*?

I am also deciding whether to sew the feathers on a band attached by *Velcro* which will make them removable, so I can sometimes wear the hat with the twisted chiffon band I made for it in my favourite colour: magenta. That way the hat can be worn on more casual occasions. 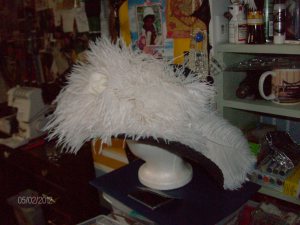 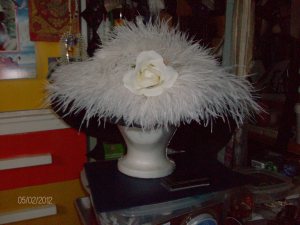 The plume shafts now need to be curled a little to make them float more closely to the silk rose. Once I have the hat on my head I will be flattening it a little more, as it seems to be drooping too much at the front. I guess it depends on the angle I set it on my head too! 🙂